DISTRICT PROFILELocation Kaliro District borders Kamuli District in the west, Iganga in the south, in the north-east it adjoins Pallisa District and in the north, Kaliro is bordered by the Lake Nakuwa and Pallisa. It was curved out of Kamuli District in 2015. The District Headquarters are located 1km from kaliro Town Council along Nawaikoke Road. Administratively the District has two Counties these include;Bulamogi County and Bulamogi North West County.   it has 11 sub counties and one town Council. these include;Namugongo Sub CountyKasokwe Sub CountyBuyinda Sub CountyNamwiwa Sub CountyGadumire Sub CountyKisinda Sub CountyBumanya Sub CountyBudomero Sub CountyNansololo Sub CountyBukamba Sub CountyNawaikoke Sub Countyand kaliro town council. Geographical characteristicsAlthough Kaliro is located at the Eastern  part of Uganda, it has characteristics like a border district. Besides the single dry-weather road between Kaliro and the main road from Iganga to Mbale, the motorable connections to neighboring districts are directed towards Kamuli, Buwenge and Iganga towns. Therefore the most important road is the tarmac road between Kaliro and Iganga.Topography Geologically Kaliro like most of Uganda exists of “wholly changed rocks”, a kind of Precambrian rocks”. Only on the lakesides of Lake Kyoga one finds quaternary sedimentary rocks. The soils are predominantly dark brown clays (grumosolic soils), underlain by gneiss. It has generally shallow sandy loams of medium to low fertility.ClimateThe rainfall is a climatic factor of the greatest economic significance for the district. The district experiences a bimodal type of rainfall with peaks in March-June as well as August –November, with the March to June peak as the major one. The average annual temperatures in most areas of the district range from 190 C -250 C Celsius.Vegetation The predominant vegetation cover in the district is the forest/Savannah mosaic constituted of a mixture of forest remnants and savannah trees with grass and shrubs. Much of it is secondary vegetation that has succeeded the original forest cover as a result of farming, timber and fuel harvesting and other forms of land use do take place. Kaliro district is experiencing decline in land productivity arising from un controlled over exploitation of resources especially soils leading to soil in fertility and degradation, encroachment on wetlands mainly for rice growing. It mainly results from population pressure and poor land use practices. Area Kaliro has Total area of 905.16km of which 872.00 is land and 33.16 is water. 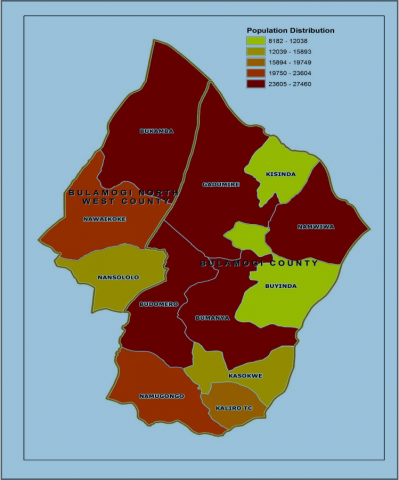